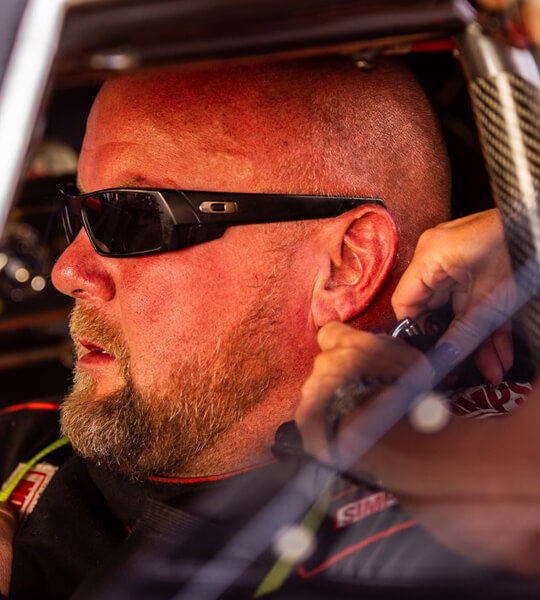 Born in Ann Arbor Michigan, son to Jim "Bad Boy" Howe, Jim is a second generation drag racer who began racing in Michigan in 1981 at the age of 8 in a program called Junior Eliminator, a youth class where he raced motorcycles less than 250cc.

By age 15 Jim was racing in local bracket races in a 1965 Chevelle that his parents still own today.  Winning the High School Nationals atMilan Dragway in 1989 and 1990. In 1989 Bob Mandel built Jim Howe Sr a new IROCSuper Comp Camaro and Jim Jr quickly jumped at the chance to drive the car. At 16 years old Jim got his NHRA Super Comp license and began racing the IROC in the Detroit area.

In 1985 Jim’s parents bought Central Michigan Dragway. This is where Jim had the opportunity to race anything and everything with wheels. By the age of 12 Jim was racing slower foot brake style street cars when the track was closed during the week. His father Jim Sr taught him the ropes; honing his reaction times and teaching him shift points. Jim Sr has been instrumental in all of Jim’s success. Teaching him to build motors, tune, and work on these cars his entire life.

By 1990 Jim Sr saw the need for a more competitive bracket car and they sold the Camaro and bought a S&W rear engine dragster. This was when the big money bracket racers all over the country began to know who the 17 year old was. It wasn’t uncommon to see Jim Jr double entered in both bracket races and super comp races the same weekend and for him to be in the final rounds of each class. Jim went on to win races all over the U.S in big money bracket racing, but continued to push to go faster running in the seven-second zone in the 1/4 mile at speeds of over 170 mph.

In 1991 Jim graduated High school in Belleville, Michigan and moved with his family to Tennessee where his family bought another drag strip, I-40 Dragway. Jim and his family owned and operated the track for the next 25years, but Jim still raced.

In 1994 Jim Jr built his own car, a 1994 Danny Nelson Top Dragster.Using his father's power train and engine program, the father and son team entered the IHRA Top Dragster ranks. Jim went on a unprecedented streak in Top Dragster winning the spring Nationals in Bristol, Tennessee, then the Empire Nationals in Leicester, New York, and a runner up finish in Steele, Alabama.

A burglary at his parents’ home that weekend forced the team to sit out the season as funding was not possible after such a huge loss. But it wasn’t long after this that Jim went to see high school buddy and friend Keith Szabo compete in a Small Tire Outlaw Heads Up race in Jackson, Tennessee. It was this moment made Jim want to get behind the wheel of a Small Tire Outlaw Car. By 1997 Jim had built his first Outlaw StreetCar. a 1988 Monte Carlo that quickly became known around Tennessee as a streetcar you didn’t want to line up beside.

Jim continued to bracket race and continued to win bracket racing, but his love was Outlaw Heads Up cars, and over time Jim positioned himself to be able to do just that; race insanely fast small tire cars.

By the early 2000's Jim started his own head’s up series, Bounty Race. With limited prep and no clocks, this race series was much like the street. This series took off quickly with both racers and fans alike, and cultivated theHeads Up racing that is now commonplace in the south.

The series and promoting put Jim’s racing on the sideline, but allowed him to race some of the bigger races and work on building the car he runs today. During this time Jim knew he wanted to get back to racing full time and needed a business that would allow him the time to be able to, so Jim entered the bail bonding industry. Working as a bail bondsman, Jim has found his niche.

In 2016 Jim started Big Jim’s Bail Bonding and began updating his ever popular 1968 blown alcohol Camaro. By 2017 the car had been completely rebuilt by TyTech Performance in Lewisburgh, Tennessee by Tyree Smith, this time with a blown alcohol Brad Anderson Hemi. Jim tested the car most of 2017 and started running Limited Drag Radial in 2018 with some promising results and a few wins.Jim updated the engine program and set out in 2019 to run the complete Drag Radial schedule. With a win in Louisville, Kentucky, Jim went on to win every Limited DragRadial race he ran, losing only one round of competition in 2019, before ultimately winning the World Championship.

When 2020 came and COVID took over the race venues, Jim took the opportunity to go back to his roots and start back street racing and running NoPrep.  Jim put a team together and won the JJ Da Boss Arm Drop Team race in Crossville, Tennessee, setting the stage for his TV debut on Season 2 of “Fastest in America” on Discovery Channel.Here, he and Co-Captain Sherrybeth Madewell hit the scene, going to the quarterfinals in Fastest in America.

After filming, Jim went to California for MAV TV where he filmed “Horsepower Wars No Prep Edition.” It was also during this time that Jim built a car for his wife to race. Miss Demeanor was built in 10 days on a $10,000 budget. Team Homegrown put down the most horsepower seen on the show with that build, making nearly 300 more horsepower than any of the other teams.

2021 has kicked off in similar fashion where Jim took his new Team Southern Assassins to “Fastest in America” Season 3 and is now running the “No Prep Kings” series for Discovery Channel. If history shows anything, it’s that Jim will work to make it happen. And if his past successes are any indication of the future, it’s safe to say that No Prep Kings will know his name and know it well into the future. This team has no quit in them and will rise to the top.